The longest period of time in a row singing in Basque 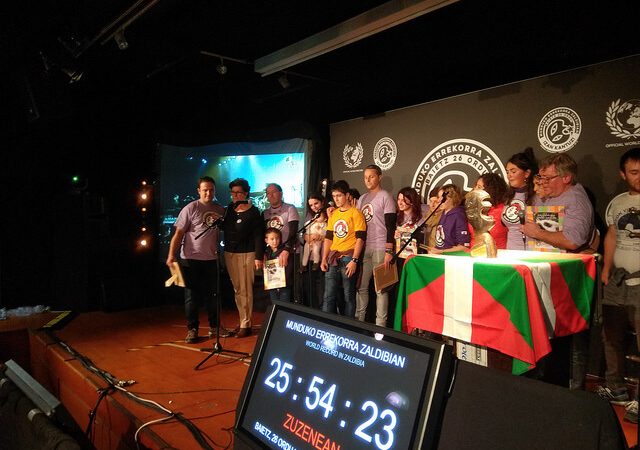 The people of Euskal Herria (Basque Country), established last weekend, November 10-11, 2017, a new Official World Record (OWR) in the category of most time continued singing in Euskera. During 26 hours, the people of the Basque town of Zaldibia, sang in the village’s theater without interruption, in a karaoke format and without repeating any song.At 6 o’clock on the afternoon of November 10, many people from the village (of only 1500 inhabitants in total), arrived at the Zaldibia theater, the challenge ended 26 hours later, on the 11th at 8 o’clock in the afternoon.

According to Mujika, there was a large audience, the people of Zaldibia were very keen on the world record, with older people, children, and people of all ages.In addition, a badge was given to all the people who participated and you could buy record merchandise. 748 people from Zaldibia participated in the event. He also states that since the record was 26 hours in a row, they slept less time, but it was worth it. In addition, people from other places traveled to Zaldibia to participate in the record, such as Catalonia, Vizcaya, Lasarte, etc. The record did not exist in this category, the most similar was in Karaoke format in Italian, but it was less hours and without OWR registration.A sculpture by the artist Xabi Ormaetxea in wood based on Picasso’s Gernika has also been created to give the relief to the other towns who want to break the record. It seems that next year, the relay will be taken to beat the record in another Basque town. Among those present in addition to Basque singers, the Official World Record judge, David Ventura, who stressed that OWR always tries to certify world records destined for beautiful causes such as the survival of such an ancient language.The method of transmission of the Basque language has been the song in an important part, therefore, with records like this one, it will never stop being used.A nation that sings, will never die.

In the opinion of one of these organizers (known as Agustin Mujika), this has been a very successful initiative in all the media, and Basque has been praised as a language. It could be sung in groups, and the songs were chosen from a list. Mujika says the turnout was tremendous, with the whole town of Zaldibia making an effort to set a record. Both children and young people as well as adults. All participants were given a “badge” as well as a small merchandising of the record with different souvenirs. Almost 1000 people took part (of which 748 were horsemen). Organizers and facilitators acknowledged that he slept little but that it was worth it. In addition, people from other towns came to see or take part: Catalonia, Bizkaia, Gipuzkoa (Zarautz, Lasarte, Andoain, Ordizia, etc.). With these areas and peculiarities there was no such OWR registered. Likewise, Xabi Ormaetxea has made a wooden sculpture as a testimony to the challenge and if he encourages another town he will take it to his village to overcome this challenge. It seems that already next year another town has expressed interest in taking on this challenge but we will see. Among the participants were some well-known singers in Basque singing, as well as the judge of the Official World Record (David Ventura). The latter explained that the OWRs will always try to record such records, after all, working to ensure the survival of an ancient language is very positive for everyone. Singing has been a unique factor in the transmission of the Basque language, so its use will never be lost with the encouragement of such initiatives.